It’s cocktail time again!!!  This week’s edition of Cocktail Friday was inspired by someone I know who looooooves taking their tequila shots with a slice of orange and some cinnamon instead of the usual lime/salt combo 🙂  I’ve really enjoyed it the few times I’ve tried, so I decided to capture some of that sensual flavor combo with this drink.  It’s got a little hint of apple cider to help balance the tartness of the orange juice, and I used a smoky mezcal instead of tequila to up the sensual ante.  Many of you know that I live in San Antonio…and let me tell you, the mezcal flows like water down here!  Most bars have at least 5 varieties on the shelf at any given time.

Not familiar with mezcal?  It’s basically tequila with a smoky flavor…but of course, it’s more complicated than that simple explanation.  It’s made in a bunch of different areas of Mexico, though it’s most commonly produced in Oaxaca.  Unlike tequila, mezcal can be made from 30+ different types of agave plants.  The production is what really sets mezcal apart though – it’s a much more artisanal process and the agave leaves are cooked in underground fire pits instead of ovens, which imparts that signature smoky flavor.  If you’re interested, you can read more about it here.

Anyway, this is an awesome sipper cocktail to try out with your friends and family as the weather cools down and the daylight fades into night earlier and earlier.  Or maybe you could make a bigger batch for a crowd and bust this drink out on Thanksgiving 😉  Just sayin…

I garnished this drink with some dried orange slices – they’re super easy to make and really add a nice touch to a cocktail like this.  Because the orange oil and juices are concentrated into these little dried slices, it really brings a nice aromatic element to the drink.  Here’s how I made them: 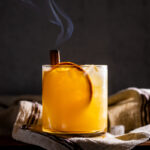 For my macro trackers out there, I wasn’t able to create a My Fitness Pal barcode for this recipe since I would have had to decide for you whether to put the alcohol calories in as carbs or fats – that’s up to you!  The 17 carbs listed here are just for the juices and the sugar in the triple sec.  For my non-macro trackers, here’s more info on what I’m talking about. 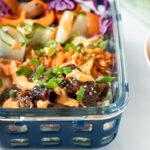 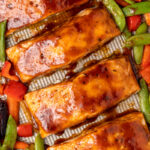 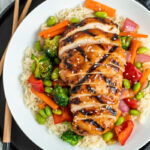 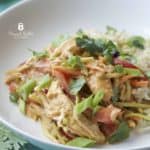 If you’ve never made your own granola at home, t