Happy Saturday, friends! It’s been a while since I’ve done a new Quest for the Best post, so this was an exciting one for me! I’ve been working hard on getting more brands and reviews posted to my other Quest for the Best series (including cleaning out old stuff that’s no longer available), but I wanted to share this one first.

I know that Dairy Free Yogurt is a little outside of my usual product review purview since it’s not packed with protein, but I know there are plenty of you out there who are sensitive to dairy (myself included)! For some reason, yogurt is probably the worst offender on the dairy spectrum for me, so even the thought of digging into a tub of yogurt hurts my stomach 🙁 I can have a little here and there – enough to taste test smoothies or pancakes made with Greek yogurt, but too much beyond that and I’ll end up rolling around on the ground in pain.

One thing I noticed while I was doing side-by-side taste testing was that each type of yogurt alternative had a distinct flavor. No matter how well (or poorly) the brand did with their version of the yogurt, that underlying flavor was still there. My recommendation is that if you know you don’t like a certain base flavor, then you probably aren’t going to be a huge fan of the yogurt alternative made from it. Here are the “bases” that seem to be most common:

All the prices listed are what I actually paid at my local grocery stores.

Here’s how this Quest for the Best series works: Below each brand photo you’ll see a little spreadsheet snippet that includes my rating of taste/texture, plus the macro breakdown, price, and ingredients list.  You can click on the little snippets to see them larger or you can click here to see the entire spreadsheet at once.

This is the rundown of different colors you’ll see in the macro charts below:

***Click the link above or any of the spreadsheet snippets below to view the full spreadsheet or zoomed in versions of each snippet.***

Here’s the link again to that full spreadsheet! 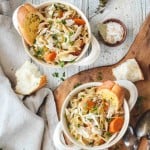 EGG WHITE MUFFINS 3 WAYS 🥚 I’ve made a lot of