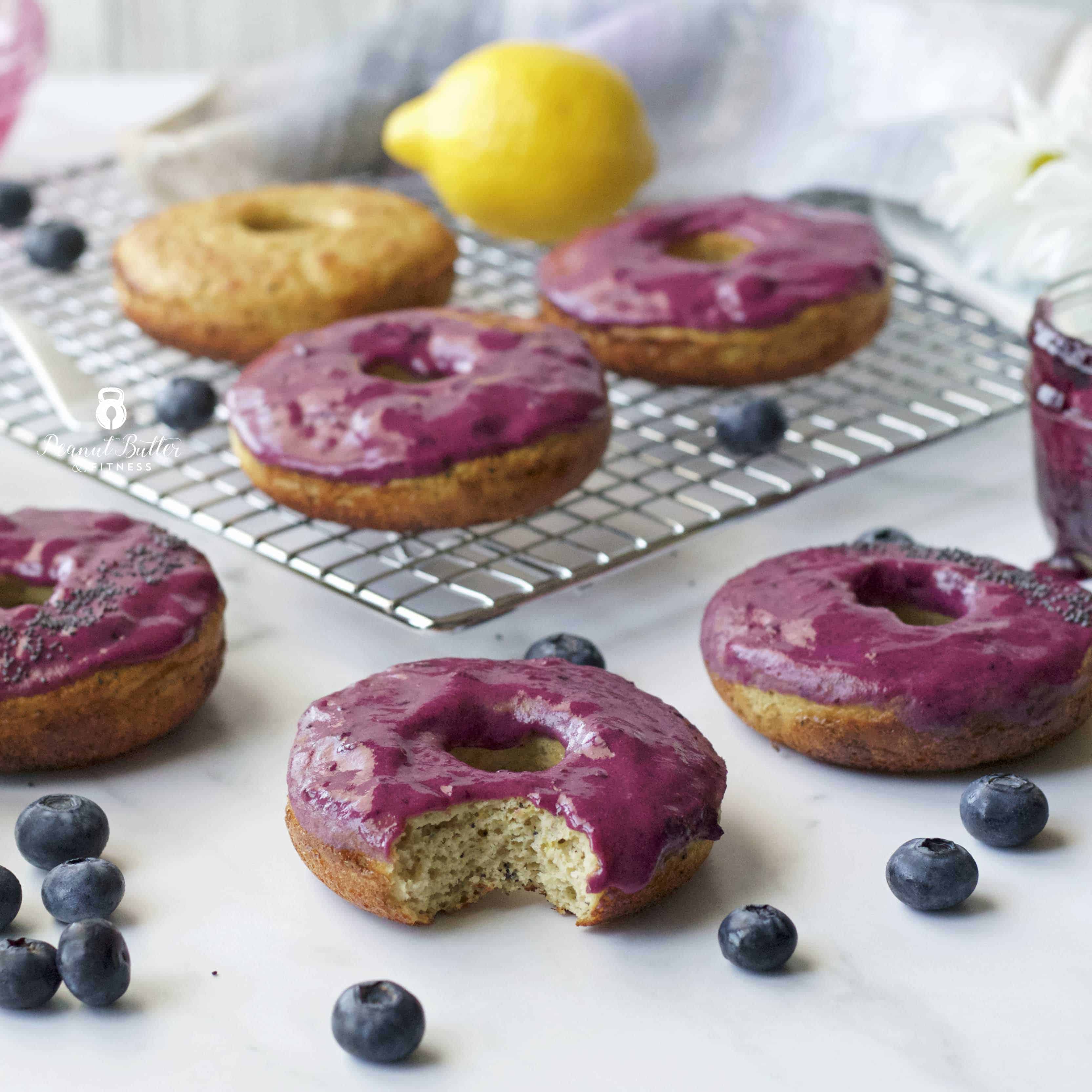 Happy National Donut Day!!! Yes it’s a for real holiday…just swing by any number of places to score a free one today if you don’t believe me.  Or you could totally make a macro friendly, delicious version of your own at home.  I’m talking about these fluffy, cakey Lemon Poppyseed Protein Donuts with Blueberry Glaze.  They’re only 100 calories each (with glaze) and are actually really easy to whip up. 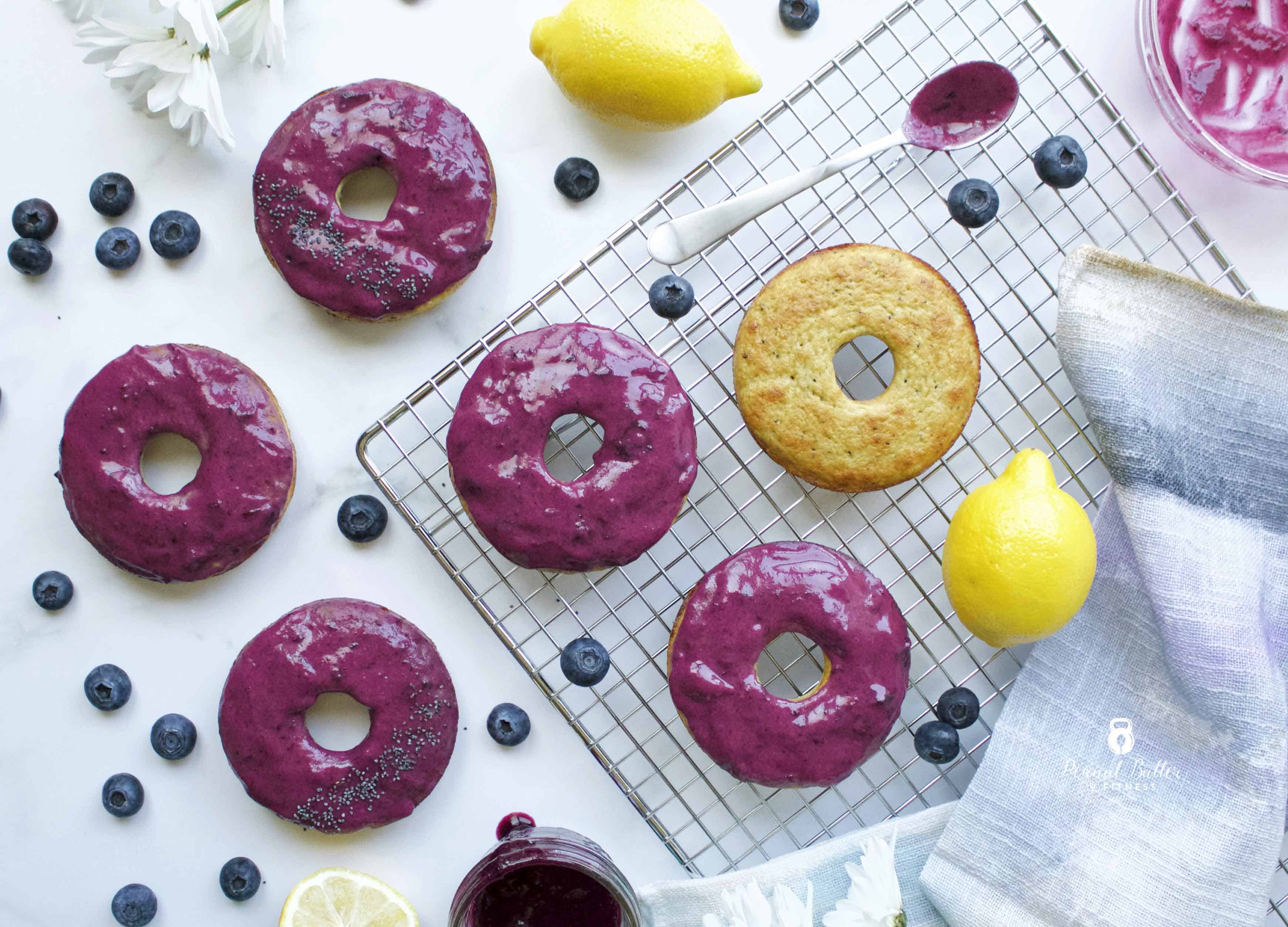 If you’ve been around PBF for a while, you know that I loooooove blueberries and celebrate the heck out of them every summer.  Well, get excited, because that time has arrived!  Blueberry and lemon are a classic combo, as are lemon and poppyseed.  And they all meld together for summery donut perfection in this recipe!

I sifted the dry ingredients and whisked the egg in this recipe to help achieve that light and airy texture in the donuts.  I highly recommend doing the same, but you obviously don’t have to.  You’ll likely just end up with a slightly denser donut.  These bake up in the oven thanks to the magic that is a donut pan. 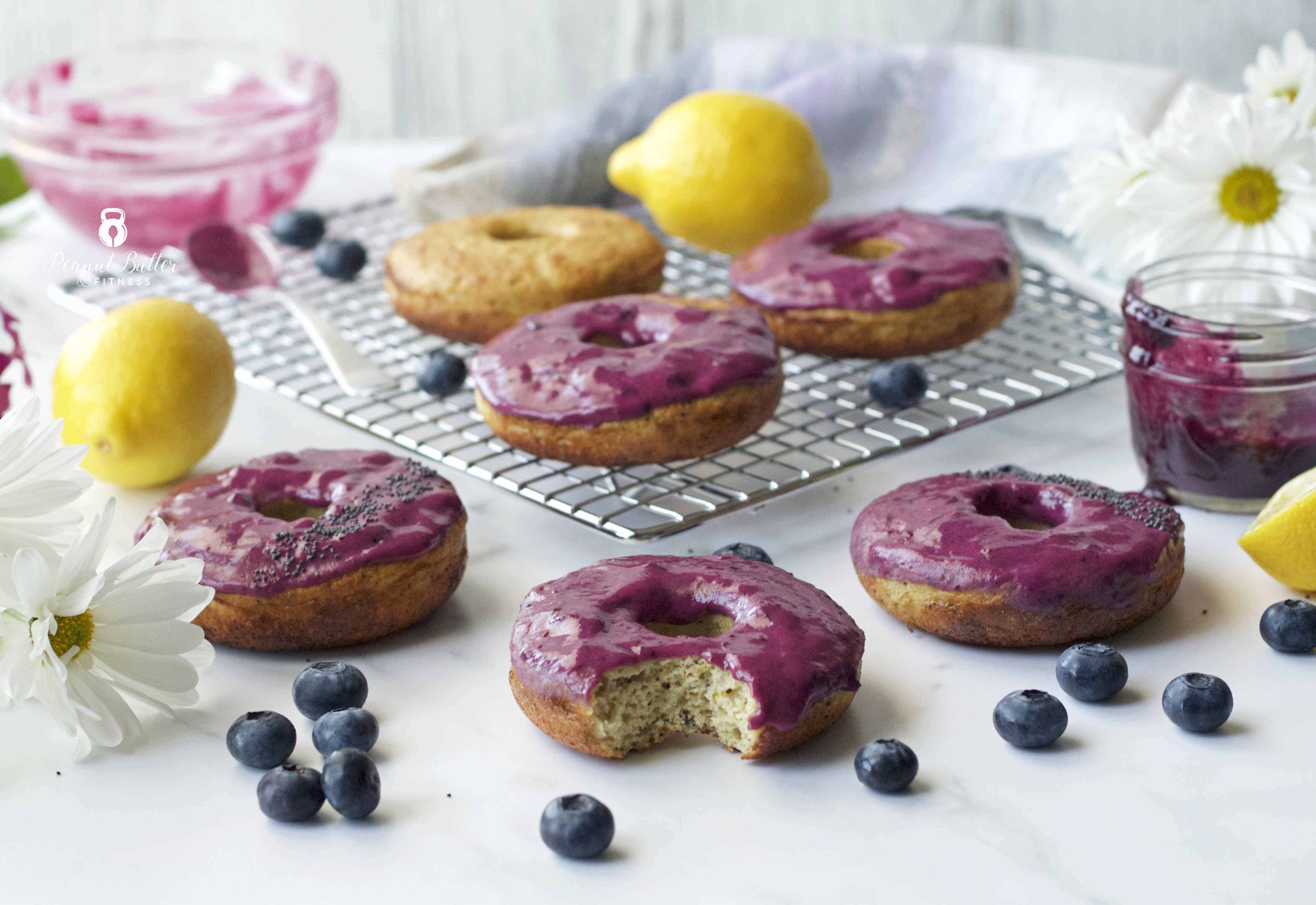 The blueberry glaze on these donuts is made with Swerve Confectioner’s Sweetener, which is like a lower calorie version of powdered sugar.  You can of course use regular powdered sugar in the glaze, but it will change the macro content of the donuts.  I also didn’t use a ton of the stuff, which means that the glaze never fully hardened…you’d have to at least double (maybe triple) the amount of powdered sugar in order to get that classic glaze effect.

I’d recommend eating these donuts within 2-3 days of making them.  Store them in the refrigerator loosely covered with plastic wrap. 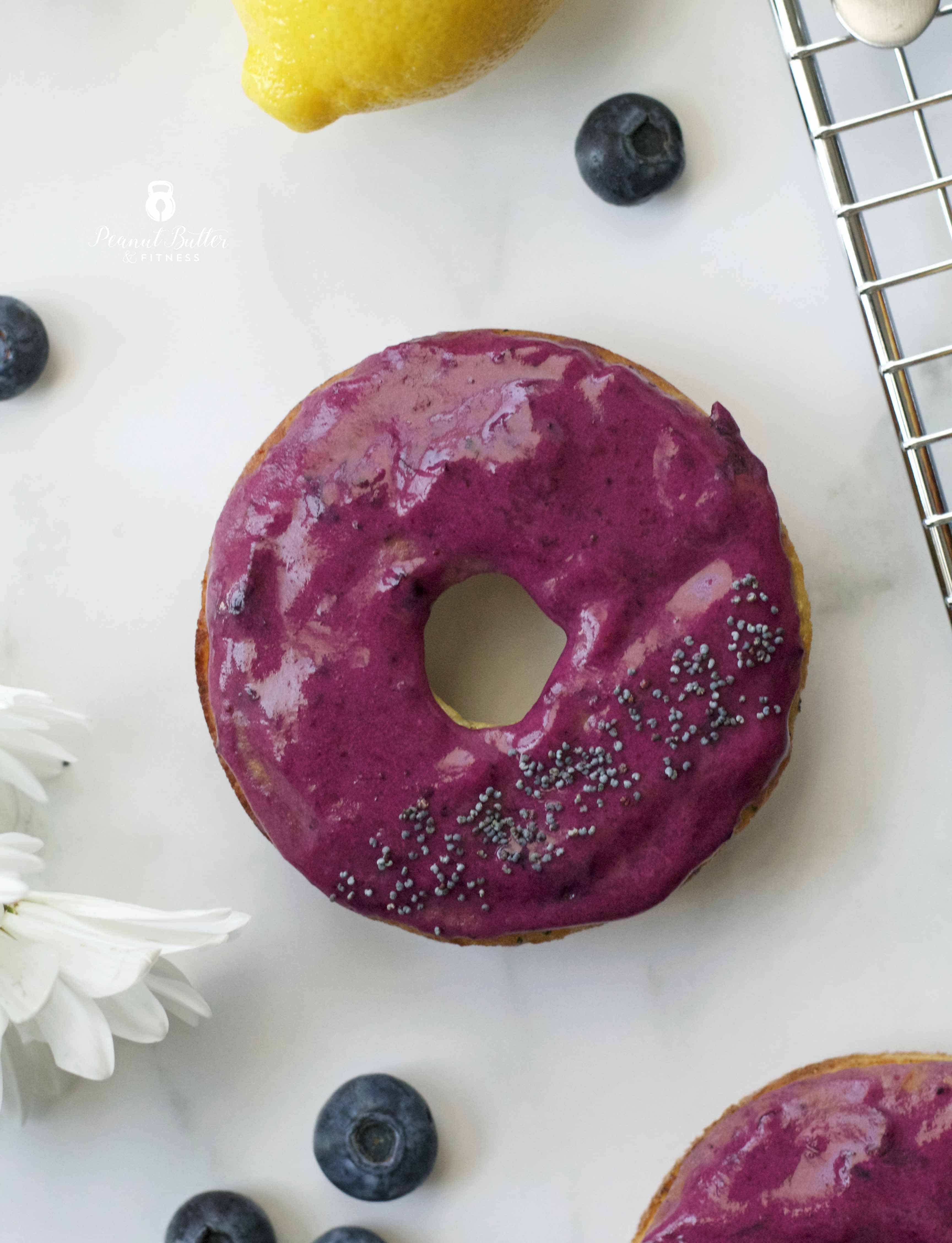 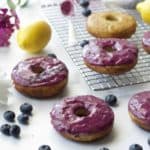 Due to the use of sugar alcohols (11 grams) in the Monkfruit sweetener and confectioner's sugar, the MFP barcode for this recipe only shows 7 grams of carbs per donut.  Read more about how sugar alcohols impact macro/calorie counts here. 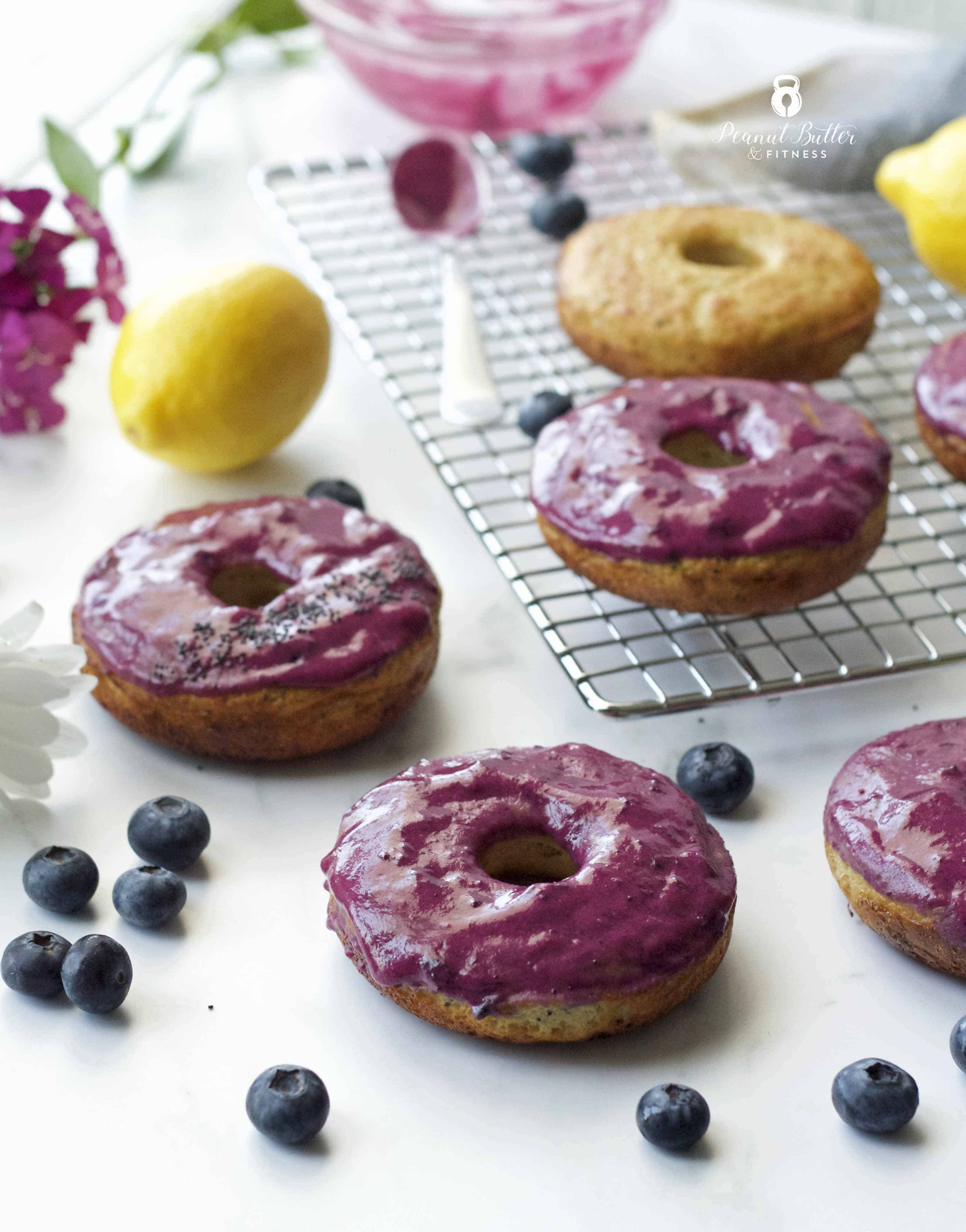 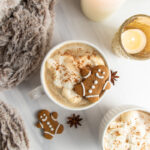